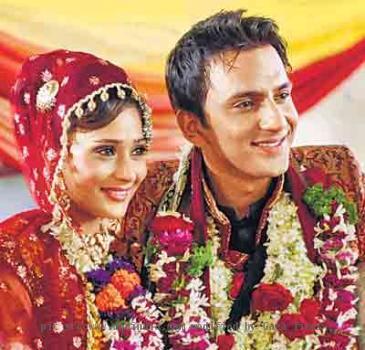 MUMBAI, INDIA (GaeaTimes.com)- The grand wedding ceremony of television stars Sara Khan and Ali Merchant was televised on Thursday night in the Colors reality show “Bigg Boss 4.” Considering the hype that the wedding on the sets of the reality series had managed to generate, it hardly comes as a bolt from the blue that latest episode of “Bigg Boss 4″ was successful in receiving wide viewership among the fans of the reality series. The buzz engulfing the marital nuptials on the “Bigg Boss” house was all the more given the widespread rumors that have been circulating in the media circles claiming that the love-birds are already married and the wedding ceremony on “Bigg Boss” was nothing but a publicity gimmick.

The rumors surrounding the marital status of Sara Khan and Ali Merchant hogged the limelight after the “Bidaai” star’s parents revealed to the media that the pair have already tied the knot about a year ago. Moreover, Sara Khan’s parents have also revealed that they were asked to keep the news of the wedding a secret as it might have affected their careers and as they were featuring in the Colors reality show. Just a day before their much-hyped wedding in the ‘Bigg Boss” house, a reputed media source released pictures of their Nikaah that took place in the television actress’ home in Bhopal a year ago.

In the meanwhile, rumors are also claiming that Sara Khan and Ali Merchant have both been paid a whopping Rs.50 lakh to tie the knot on the show in the gala wedding so that it could a pivotal role in giving a boast to the TRP’s of the show.