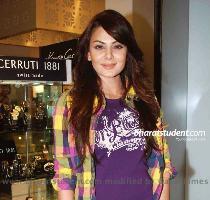 MUMBAI (GaeaTimes.com)- The beautiful Aanchal Kumar was eliminated from the popular reality show of Colors Television, “Big Boss 4″. The model spoke up about her elimination, experience and about her terms with the other inmates in the house, as she opened up to Salman Khan. She said that the main reason why she has been eliminated is because of her simplicity.

Aanchal Kumar, like all other eliminated contestants, came to know about several musks and hypocrisies of the other contestants as she saw the recorded footages and clippings of the other contestants. In Sara Khan’s clipping, she came to know that the newly married girl has told the other inmates that Aanchal Kumar was gelling well with Rahul Bhatt and also discussed derogatory things about the other inmates, especially Hrishant Goswami. The noted model was shocked and hurt seeing this clipping and said that what ever Sara Khan said in her absence was false. She also gave a good piece of her mind to the musked Sara Khan, and described her as sly, who would be punished by God. About her relation with Rahul Bhatt, Aanchal Kumar said that the two were just friends. She also said that in a polluted and politically maligned environment of the “Bigg Boss” house, she was lucky to have got a friend like Rahul Bhatt, who according to her is a very genuine person and true from the heart.

In general, Aanchal Kumar was not looking too disappointed with her elimination. She said that she was aware of the male attention she got from Ashmit Patel, Hrishant Goswami and Rahul Bhatt, and she enjoyed them to some extents as well. However, she never crossed her limits and never allowed them to do the same, the model went on to say.

MUMBAI - The marriage between Sara Khan and her beau Ali Merchant on "Bigg Boss 4" was nothing but "...

MUMBAI (GaeaTimes.com)- The beautiful Aanchal Kumar was eliminated from the popular reality sh...

NEW DELHI - Model Aanchal Kumar, who was evicted from the Bigg Boss 4 house Friday, now feels she is...

NEW DELHI - All the controversies, fights and romances on Bigg Boss 4 are scripted and pre-planned, ...

NEW DELHI - The line-up of contestants for "Bigg Boss 4" has a Pakistani terrorist's former lawyer, ...

'We Are Family' earns Rs.27 mn from paid preview

NEW DELHI - Kajol and Kareena Kapoor starrer "We Are Family", which opened with mixed reviews, h...

'We Are Family' earns Rs.27 mn on opening day

NEW DELHI - It seems that Kajol and Kareena Kapoor's avatar as mothers in "We Are Family" has ma...
Copyright© 2010 The Gaea Times