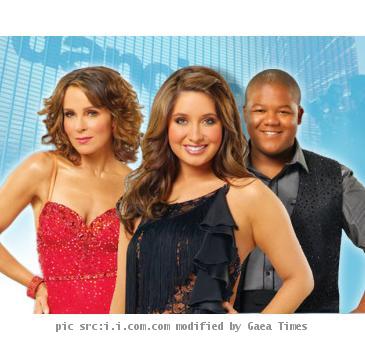 LOS ANGELES (GaeaTimes.com)- “Dancing with the Stars” contestant Bristol Palin expressed her disappointment last night and said that people don’t think that she deserves to be on the show. She said that people literally “freaked” out when Brandy got eliminated from the show and she was saved. She said that she has continued to improve “week by week” but people did not acknowledge that. “Dancing with the Stars” finale saw some fantastic performances by the finalist who performed their best to impress the judges and audience. Despite her low scores, Bristol Palin managed to get public vote and remain in the competition and hence she had to face lot of criticisms from people and media also.

Bristol Palin scored 52 out of 60 last night which is the lowest score of the night. Jennifer Grey scored perfect 60 and Disney Star Kyle Massey scored 56. However, the fate of the contestants will be decided on the audience vote and hence each contestant is high on hope this time. The rising popularity and vote of Bristol Palin has landed herself in hot waters as media outlets are of the opinion that she has been backed by Sarah Palin’s Tea Party. Bristol Palin called this as rumors and said that there are lot haters who are waiting for her to fail and she is waiting ton prove them wrong in the “Dancing with the Stars” stage.

Katrina Smirnoff, the partner of Mike “The Situation” Sorrentino said that Jennifer Grey is the strongest dancer, Kyle Massey has the strongest personality and Bristol Palin has improved with each performance. She said that it would be difficult to say who would win the mirror-ball trophy of “Dancing with the Stars” as the votes would decide everything. “Dancing with the Stars” results will be aired on ABC and the loyal fans of the show are waiting to see who is crowned in the end.