Karina Smirnoff Not Ready for Marriage! 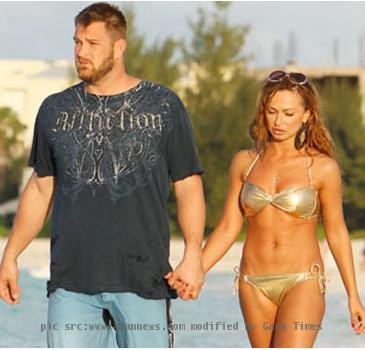 LOS ANGELES (GaeaTimes.com) — As the rumors are flying high regarding Karina Smirnoff and her new fiance Brad Penny, both had dumped the idea of getting married soon.

After Smirnoff announced her engagement earlier this week, rumors surfaced that she planned to hold the wedding in Cabo San Lucas on January 7. But a source has confirmed this news to be a false one. The “Dancing with Stars” famed celeb is in no hurry to tie the knots with the baseball superstar and there is also no fixed date for their marriage.

If things work out well, this will be Smirnoff’s first marriage. She previously dated Mario Lopez and was briefly engaged to fellow Dancing with the Stars pro Maksim Chmerkovskiy. Smirnoff began dating Penny in October 2009 shortly after calling off her engagement to Chmerkovskiy.

To know more details about how Brad Penny proposed Karina, go through one of our most popular articles - Karina Smirnoff Gets Engaged to MLB star Brad Penny

LOS ANGELES (GaeaTimes.com) -- Nudity in our modern society is very much appreciated as a way of...

Austria: ballerina axed for posing for nude photosVIENNA ? The management of the Vienna State Opera ...

Obscenity, whale snot take top honors at Ig NobelsBOSTON — Next time you crush your thumb with a h...

David Murphy homers, goes 3 for 5 to lead Rangers over Tigers, 11-4

Murphy homers to lead Rangers past TigersARLINGTON, Texas ? David Murphy had a homer upheld on repla...
Copyright© 2010 The Gaea Times