Rebecca Budig Upbeat With “Skating With The Stars” 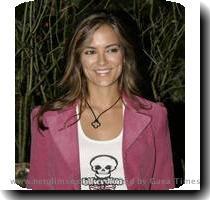 LOS ANGELES (GaeaTimes.com)- Rebecca Budig, the actress who rose to fame in the popular ABC series, “All My Children”, will now be seen in the new ABC show, “Skating With The Stars”, that was premiered yesterday. The format of the show has been derived from the popular show of the United kingdom, namely, “Dancing On Ice”. In the premiere episode, much to the surprise of many people, Rebecca Budig got the highest score to surprise many people.

Rebecca Budig has been paired with her partner, Fred Palascak, a thirty year old professional ice skater, who began his career in 1994. It was easy for Rebecca Budig to make an achievement in the first episode because, she has experience in Ice Skating. She reportedly used to be an ice skater when was really young. Therefore, she knew about the basic techniques and styles of this art. Their choreographer had no need to make an effort to teach the star about the ticks and trickeries of ice skating from the scratch. Instead that time was dedicated for her rehearsals. This yielded her with the highest score of 45. Her performance was marked with oodles of confidence and and total comfort as she hit the stage with her skating shoes. Her performance was concluded with a huge round of applaud and everyone knew that hardly anyone could surpass her that day.

Rebecca Budig as followed by Jonny Moseley and his partner Brooke Castile, who came second with a score of 40. Vince Neil and Jennifer Wester got the lowest score of 28, which increases their possibility of getting eliminated in the next episode, if the combined judges points and viewer votes does not act in their favor. However, it seems that Rebecca Budig is here to stay.