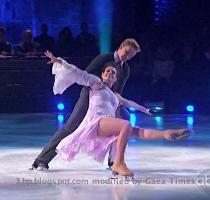 LOS ANGELES (GaeaTimes.com)- Sean Young is 51, yet, her age does not seem to be a factor when it comes to skating. That is the reason why Sean Young, despite being the old contenders in “Skating With The Stars”, was seen with full zeal to make her performance of most remarkable in the premiere episode of the show yesterday on ABC at 8:00 PM.

Sean Yong is one of the six contestants, who will be displaying their skills on the steel shoes. The other five contestants are, Rebecca Budig, Bethenny Frankel, Jonny Moseley, Vince Neil and Brandon Mychal Smith. Each of these participates have been paired with a professional skater, who specialize in ice skating. Sean Young has been paired with Denis Petukhov, who is a 32 year old professional ice dancer, and has gained recognition by participating in high profile events like Winter Olympic Games, World Championships, U.S. Championships and Skate America. In the first episode, this pair bagged the fourth position with 34 points. However, it is expected that they have the potential do even better. The first position in the premiere episode was bagged by Rebecca Budig and her partner, Fred Palascak with 45 points. Jonny Moseley and Brooke Castile got the second position with 40 points. Brandon Mychal Smith and Keauna McLaughlin came third with 36 points. The second last position was taken by Bethenny Frankel and Ethan Burgess points. However it was a very narrow escape for them, as the lowest scorer yesterday, Vince Neil and Jennifer Wester were only one point behind them, with only 28.

Sean Young and her partner Denis Petukhov looked good together, despite the huge age difference. However, some critics say that her performance was subdued by that of her more professional partner. She was also unable to cope with the rigorous moves that was skilfully choreographed. On that note, one might wonder for how long she can stick to the show.