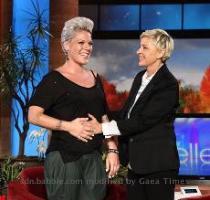 LOS ANGELES, (GaeaTimes.com)- Pink and her husband Carey Hart, are expecting their first child. The news is now confirmed. Initially there were a lot of speculations going on, when her first few pregnancy photos were uploaded in the internet, where the singer gracefully displayed her pregnant status through her cute baby pooch. A few days ago, she confirmed the news in “Ellen DeGeneres Show”, as her baby bumps seemed more apparent.

Pink’s pregnant photos are rather inviting a lot of good hopes and well wishes from all her fans though Tweeter and Facebook. Her pregnancy is still on the initial stage, but Pink seems too happy to talk about it. Yesterday, in the American Music Awards, she rocked the entire audience with her “Raise Your Glass” performance. However, despite her sizzling performance, the audience were more engrossed in admiring her baby pooch than her singing. A few days ago certain rumors were accompanied with her first confirmation of pregnancy at the “Ellen DeGeneres Show”. The media reported that Pink opened up about her pregnancy to Ellen DeGeneres before disclosing the news to her own father. To that, she tweeted in her own humorous way, targeting at the media, saying that she was unable to say the news to her father because her husband Carey Hart knocked her up. In that case, she would rather ask her father to watch the show and get the news. Jokes apart, both her parents are delighted to know about her pregnancy, and her mother wished her a baby girl, who would look just like this popular singer.

Pink’s pregnant photos are right now being widely viewed by all the netizens, and especially her “tweethearts”, wishing her all the good luck for her first mother hood. This was more intensified after yesterday’s performance at the American Music Awards.