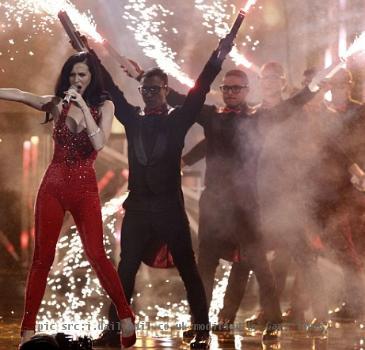 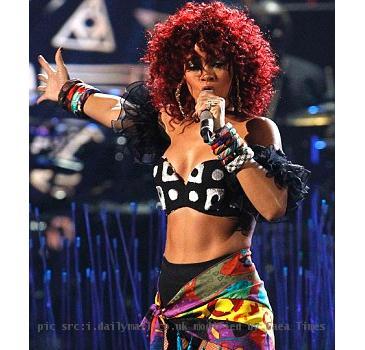 LOS ANGELES (GaeaTimes.com)- American Music Awards (AMAs) 2010 saw some spectacular performances by the music sensations who rocked the stage on fire. Apart from the Favorite Artist Of The Year Justin Bieber, Black Eyed Peas, Miley Cyrus, two singers Rihanna and Katy Perry gave breathtaking performances last night on stage and the crowd roared and cheered for them in the end. Rihanna won the much coveted award for Favorite Soul/R&B Female Artist.

The “Unfaithful” singer gave a grand opening to the night with her fantastic performance with a medley of songs from her album “Loud”. Rihanna received award for Favorite Soul/R&B Female Artist and in her thanksgiving speech she thanked everyone in the crowd and also she said, “This is amazing” out of joy and excitement. The singer wore a transparent lacy red dress while walking the red carpet. However, later she changed her dress and during her performance the audience saw her with black and white top with black hot pants. The singer covered the hot pants with a colorful shawl and her high heeled front covered grey shoes complemented her dress all the more. She first sang “Love the Way You Lie Part II”, then “Only Girl In The World” and at last “What’s My Name” at the American Music Awards (AMAs) 2010.

Beautiful Katy Perry wore a strapless pink dress while entering the event. However, during her performance at the American Music Awards (AMAs) 2010 she wore a deep red cat-dress. She took to the stage and performed “Firework” from her album “Teenage Dream”. Previously, the newly married singer said that the song is going to be adorable and gorgeous. After the performance the audience will surely say that the song lived up to the expectation of the audience.

COPD could be an auto-immunity problem

Transit to Indian goods through Bangladesh won't be free

DHAKA - Bangladesh will not give free transit for taking goods from one part of India to another, sa...

GAYA - Maoists torched four trucks in Bihar's Gaya district in protest against the visit of US Presi...

PATNA - Maoists in Bihar blew up a railway track and torched trucks and mobile phone towers to prote...
Copyright© 2010 The Gaea Times