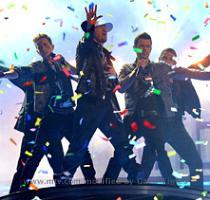 LOS ANGELES (GaeaTimes.com)- The star studded AMAs this year was closed by the joint performance by two of the biggest boy-bands of the 90s, New Kids On The Block and The Backstreet Boys. With young pop stars like Justin Bieber, Miley Cyrus and Taylor Swift stealing the limelight in recent years, the boy bands proved that they still have what it takes to get the crowds grooving.

The focus shifted again to the vocals of the Backstreet Boys as they group finished off the nights performance with ‘Larger Than Life’ that was complemented by a chant by all the 9 members on stage. Confetti fell from the sky as the audience erupted in cheers at the end of the performance. The New Kids On The Block and Backstreet Boys form the supergroup NKOTBSB which will be touring next year. The group announced the tour dates recently and going by the buzz that their AMA performance generated, it looks like the new age pop stars will soon have competition. The groups also appeared on the red carpet of the event together.