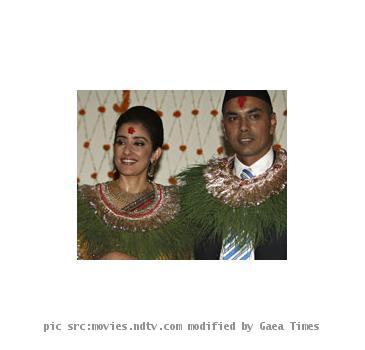 MUMBAI, INDIA (GaeaTimes.com)- Although the boom in social-networking sites in the recent years provides the perfect platform to interact with your near and dear ones, it has its negative attributes as well. In a fit of rage you might end up posting a message that is instantly read by everyone although later you might regret it. This seems to hold true especially in case of celebrities who aim to stay close to their fans through their profiles on various social-networking sites. Who knows this better than actress Manisha Koirala who shocked her friends and fans alike recently when she posted on her Facebook profile that she wants a divorce after just five months of marriage!

Late last week, the Bollywood star took to Facebook to express her desire to get a divorce from her husband Samrat Dahal while also adding that she hopes her decision to end her marriage would not hurt her parents. As expected, the news that Manisha Koirala’s marriage is on the rocks came as quite a shocker to her friends as well as her fans given the fact that she tied the knot just few months ago on June 19, 2010. However, just few hours after posting the message, the 40-year-old actress deleted it but by then the news of her marital turmoil has already spread like a wild fire on the web.

Although rumors of Manisha Koirala’s separation from her husband is abuzz after her Facebook post, her close friends have refuted the speculations about the split. A close friend of the Bollywood star revealed to a media outlet that the actress is indeed happy with Samrat Dahal and just like any normal couple they might have had a fight with prompted Manisha Koirala to put up the Facebook post.