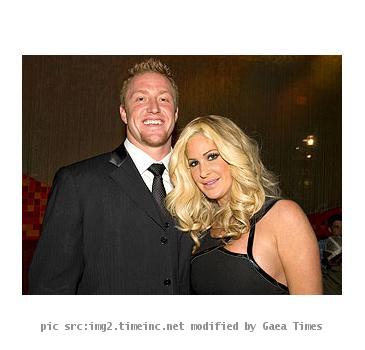 LOS ANGELES (GaeaTimes.com)- Television personality and “The Real Housewives of Atlanta” fame Kim Zolciak is all set to enjoy the bliss of motherhood once again. The socialite announced that she is pregnant with her third child with her boyfriend NFL star Kroy Biermann in the home page of her social networking site. Previously Kim Zolciak denied all the rumors as she wanted to keep the whole matter under wraps for sometime. Kim Zolciak began dating Kroy Biermann since May.

Kim Zolciak and Kroy Biermann graced the cover of a reputed lifestyle and celebrity magazine where the celebrity star showed her baby bump and also gave an exclusive interview to the media. However, Kim Zolciak wrote in the homepage of her social networking site that the couple is excited and happy to announce that they are expecting their child. A reputed media source reported that Kim Zolciak is three months pregnant and the couple has not yet checked the sex of the baby.