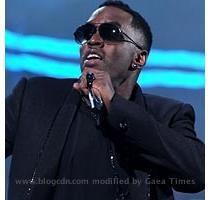 LOS ANGELES, (GaeaTimes.com)- Diddy and his Dirty Money crew, that includes Dawn Richard and Kalenna Harper, seems to be going steady as the band performed at the American Music Awards, In Nokia Theater, Los Angeles, yesterday. This is for the first time, that the band performed on this esteemed stage, considering its debut in the year 2009. The three membered will soon be launching their new album, “Last Train to Paris” on December 14. That is the reason why they found this stage to be the perfect platform to promote their album.

The entrance of the lead singer Diddy was preceded by the entry of his companions, who looked great in their white abstract dress. Diddy’s entry was accompanied with a whirl of smoke that covered the stage to impart more drama. He was cheered with full zeal by the audiences. His entry was marked with his rap performance on “What am I supposed to do when the club lights come on?” People were taken aback as he entered sporting a classy black blazer teamed with a pair of combat boots and half-moon hair part. Diddy And Dirty Money were accompanied by the orchestra, who played up the triumphant track, of his upcoming album. The band also made their performance a bit emotional as they portrayed their softer side to the audiences who were present and the viewers who were sitting at home.

Diddy And Dirty Money dedicated their performance to the “all black everything” movement. Dawn Richard and Kalenna Harper performed their latest single called “Coming Home”. In a way, their show was very successful and the band expects that their footage in the American Music Awards will surely make a for their upcoming album to an overwhelming success.

Brand, Perry's Indian jungle wedding 'to be raided if it disturbs wildlife'

LONDON - Authorities are making sure that Russell Brand and Katy Perry's Indian jungle wedding does...

LOS ANGELES (GaeaTimes.com)- The audience were treated to some high energy funk from the mus...

Rap superstar JAY-Z will lead the way at the 2010 BET Hip-Hop Awards after scoring 11 nominations. ...
Copyright© 2010 The Gaea Times