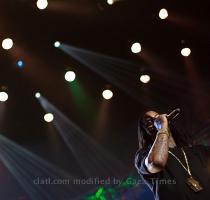 LOS ANGELES, (GaeaTimes) The BET Hip Hop Awards took place on October 2 at Atlanta. However, it was only until yesterday, that the entire show was aired at 8 PM on BET. The show saw some rocking performances from some of the best hip hop figures like B.o.B., Gucci Mane, Big Boi, J.Cole, Waka Flocka, J.Cole, Diddy, and MC Happer. The show was hosted by Mike Epps.

The lime light of the BET Hip Hop Awards was focused on Nicki Minaj and Jay Z. The rapper could not attend the award because of some other engagements. However he got the Perfect Combo award for his hit single “Empire State of Mind” with Alicia Keys. He also won the Best Live Performer award and the CD of the year for Blueprint 3.

The Track Of The Year award was won by Rick Ross, for his “B.M.F. (Blowin’ Money Fast)” number. He also performed on the same number with P.Diddy. Am Hip-Hop award went to Salt-N-Pepa, the legendary female trio, while producer of the year award went to Swizz Beatz. Cam’ron, Jim Jones, Juelz Santana and Freekey Zekey, with their song “Salute”. B.o.B grooved the audiences with his peppy number “Don’t Let Me Fall”. Bet Hip Hop Awards was a visual treat to all hip hop lovers.