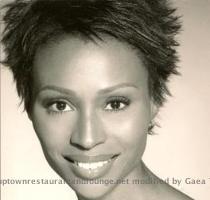 LOS ANGELES (GaeaTimes.com)- Being a reality star is a challenge and Cynthia Bailey is the latest celebrity to join the bandwagon. In a recent interview, the new cast member of ‘Real Housewives of Atlanta’ spoke about her stint on the show and also provided insights to the fans on the world of reality TV.

Cynthia Bailey said that though reality shows look easy from the couch, they are emotionally and mentally quite draining. She also said that it was a constant challenge for her to prepare for sabotage. She explained that before the scenes she is left wondering what will be the next attack towards her and how she will navigate through that. She compared the feeling to that of stepping on a land-mine. Cynthia Bailey came under unprecedented attack from fellow ‘housewife’ Phaedra Parks on the show who called her fiance ‘dirty’ and also spoke derogatorily about her house and her looks.

Cynthia Bailey, however, chose to remain tight-lipped about the Phaedra Parks’s limo episode that was aired last week and said that the audience itself would be the best judge. She also did not sling much mud at the Phaedra Parks’ pregnancy photoshoot where the reality star posed with a jar of pickles and her husband. About being in the bad books of Kim Zolciak, Cynthia Bailey said that she respects Kim Zolciak a lot and did communicate with her about the rumors going round. She said that the press ran away with the story and she was somewhat misinterpreted. She, however, asserted her statement that she did not think Kim Zolciak was as good a singer as Celine Dion.

WASHINGTON - Women suffering from anorexia are much more likely to have unplanned pregnancies and in...

WASHINGTON - Women with anorexia nervosa are much more likely to have both unplanned pregnancies and...

WASHINGTON - A beer distributor in California has landed in hot water after angering the Wiccan comm...

LONDON - The key to good health, energy and long life could be as simple as cutting down on your car...

Remarks by the President in a Youth Town Hall

WASHINGTON - A US federal judge has ordered a worldwide halt to enforcement of the Defence Departm...

Cynthia Bailey To Appear In "Real Housewives Of Atlanta" Episode 2

LOS ANGELES, (GaeaTimes.com)- Many people were eagerly waiting to have a glimpse of the sult...
Copyright© 2010 The Gaea Times