Cynthia Bailey To Appear In “Real Housewives Of Atlanta” Episode 2 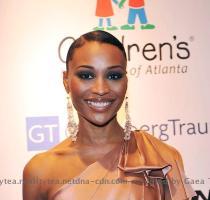 LOS ANGELES, (GaeaTimes.com)- Many people were eagerly waiting to have a glimpse of the sultry super model from Atlanta, Cynthia Bailey in the first episode of “Real Housewives Of Atlanta” season 3. However, the enigmatic diva decided not to turn up in the first episode, thereby lingering the excitement till the next one. On a telephonic interview she wittily said that its always good to save the best for the last.

Cynthia Bailey confessed that she is too sophisticated and polished to constantly be a part of the regular cat fights, hair pulling, physical and verbal abuses. Therefore in the course of the show, she could not get along with too many of the contestants except Kandi Burruss and NeNe Leakes. She said that in her first encounter with NeNe Leakes, during the shoot of the show, at the Dogwood Festival, Cynthia Bailey was under the presumption that she was way too big for her, and could not connect so well with each other. However, in their second meet, things got a little better, while from their third meet, she could not help altering her opinion about her and became good friends. Cynthia Bailey says that NeNe Leakes is a very genuine person and a very good friend. Even Cynthia Bailey created a very positive image about herself by suggesting a place to NeNe Leakes, where she could sort out her differences with her co-contestant, Phaedra Parks, with whom she had a cat fight in the last episode.

Cynthia Bailey, in the second episode of “Real Housewives Of Atlanta” was seen quite infuriated with her fiance, who kept on insisting her to get married. Her Fianc is the owner of the Super Bowl Club, and wants to get married to his girl friend as soon as possible. However, Cynthia Bailey, is not yet ready for the final commitment, which created a lot of differences between the two on the first day of her appearance in “Real Housewives Of Atlanta”.