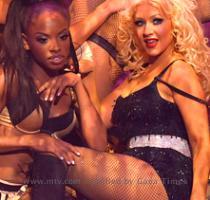 LOS ANGELES (GaeaTimes.com)- The AMAs this year saw some stellar performances by some of the biggest stars in the industry today. With New Kids On The Block and The Backstreet Boys returning to the stage to close the show, the night could not get bigger. Among some of the female artists who performed in the prestigious award ceremony, Taylor Swift and Miley Cyrus stood out for the performance that was quite unlike themselves. The show stealer, however, turned out to be pop icon Christina Aguilera who has been an inspiration for many of these new artists. Her performance provided the audience with a sneak peek into her upcoming movie based on burlesque dancers called ‘Burlesque’ that also stars Cher.

Christina Aguilera’s AMA performance was accompanied by a group of lingerie clad dancers and the set was transformed into a burlesque club. She herself sported high-heel lace up boots, fishnet stockings and a black Basque for the risque performance of the song which features in her upcoming movie. The performance not only showcased the already celebrated singing talent of the star but also some of the sizzling dance moves that she will be seen performing in ‘Burlesque’.

Christina Aguilera admitted before that performance that though she was excited about performing at the AMAs, she was also slightly jittery as her legs were sore. She added that the choreography of the performance was excellent and the audience will be in for a real treat. The lingerie clad dancers also managed to grab the eye-balls with their burlesque hip-shaking and sassy attitude during the performance.