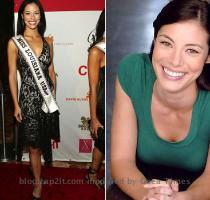 SAN FRANCISCO (GaeaTimes.com)- For all those who have been wondering who the hottie is in the latest commercial of Windows 7 mobile phone, the answer is Christina Cuenca. The 5′10″ brown haired bombshell appears in black lingerie in the commercial and though her lover is seen ignoring her for the new phone, the viewers who watched the commercial failed to do so.

In the commercial, Christina Cuenca is first seen sporting the black lingerie and posing in front of her lover who is engrossed in his cell phone. The rest of the 1 minute commercial also shows other people being completely engrossed with the new Windows phone and often finding them in embarrassing situations. One man is seen fiddling with the phone even while attending nature’s call and mistakenly dropping it in the urinal. Another man is seen busy with his phone while his son is trying to throw him a pitch to catch. Towards the end of the commercial, the son is seen getting frustrated and throwing the ball to his head.

Christina Cuenca was crowned Miss Louisiana USA in 2006. She is a model who travels across the globe for various assignments and is also an avid New Orleans Saints fan. She represented her state in the Miss USA Pageant 2006 but could not make it to the semi-finals.