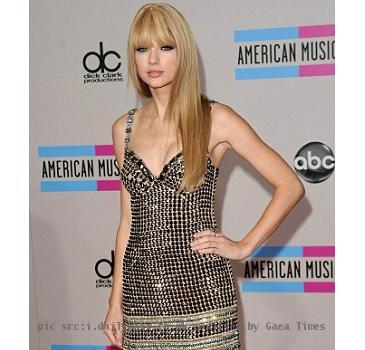 LOS ANGELES (GaeaTimes.com)- It seems Taylor Swift has come a long way since the debut of her single “Tim McGraw”. The Grammy award-winning singer did not have to turn back while climbing the ladder of her success. Last night Taylor Swift looked stunning in her short fringe hairs and her rhinestone dress at American Music Awards (AMAs). The eyewitnesses report that the singer seemed to have a complete makeover and looked different with her usual curly hair being ironed. Her black and golden strapped sandals complemented her whole look for the night.

Taylor Swift received the award for Favorite Country Female Artist of the year. Last year the singer won Favorite Artist of the Year at American Music Awards (AMAs). However, this year, while receiving her award, the country singer thanked all her fans for their love and support and she seemed happy and excited to get this honor at the award function. Taylor Swift also performed new single “Back to December” from her latest album “Speak Now” which she sang at the Country Music Awards as well. However, this time she made the song a bit different by adding a tinge of OneRepublic’s “Apologize” in the end.

The audience saw Taylor Swift in black pants and black blazer with her hair tied up when she sat in front of the piano at American Music Awards (AMAs). The singer sang “Back to December” and she stood up in the end and finished her tune. About the song “Back to December” Taylor Swift previously said that through this song she is apologizing to someone who was “incredible” to her. She also said that she has never apologized to anyone before but this time she felt she should swallow her “pride” and admit her mistake.