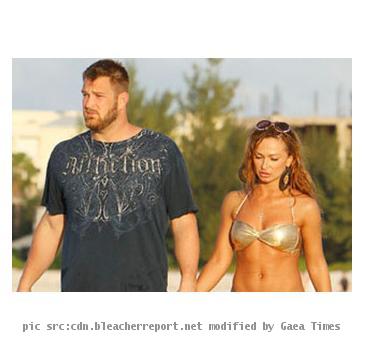 LOS ANGELES (GaeaTimes.com)- Ukrainian American professional ballroom dancer Karina Smirnoff must be on cloud nine these days. The beautiful dancer is engaged to St. Louis Cardinals pitcher, Brad Penny and she said that she kept the whole affair private because her family is in New York and Brad Penny’s family is in Oklahoma and hence they wanted them to come out and celebrate it together before letting the media know about it. The ballroom dancer showed her 4.5 carat diamond ring when she attended one of the functions. She said that the couple got engaged on October 4 when Brad Penny proposed her in the third week of “Dancing with the Stars”.

Karina Smirnoff was previously engaged to her “Dancing with the Stars” co-star Maksim “Maks” Chmerkovskiy but they ended their relationship in September 2009 after sating for nine months. The couple said that they met through their mutual friend UFC fighter Chuck Liddell and began dating on October 2009. However, Karina Smirnoff did not say anything about her marriage plans but said that Brad Penny is the “sole” reason for her happiness.