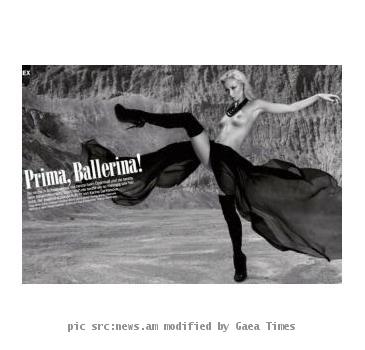 LOS ANGELES (GaeaTimes.com) — Nudity in our modern society is very much appreciated as a way of publicity by few people. Karina Sarkissova seems to be one of them. The ballerina of Vienna State Opera was fired after her nude pictures appeared in wiener magazine.

According to sources, Sarkissova was warned again again for her vulgar exposure to different magazines. In this June she received another sort of warning for her series of nude photos in Penthouse magazine, BBC reports.

While giving an interview to a Australian media, the American dancer expressed her grief over the issue. She treats it as discrimination.

Karina Sarkissova is Russian by origin. She joined the Vienna Opera in 2000.

Karina Smirnoff Not Ready for Marriage!

LOS ANGELES (GaeaTimes.com) -- As the rumors are flying high regarding Karina Smirnoff and her n...

Austria: ballerina axed for posing for nude photosVIENNA ? The management of the Vienna State Opera ...

Obscenity, whale snot take top honors at Ig NobelsBOSTON — Next time you crush your thumb with a h...

David Murphy homers, goes 3 for 5 to lead Rangers over Tigers, 11-4

Murphy homers to lead Rangers past TigersARLINGTON, Texas ? David Murphy had a homer upheld on repla...
Copyright© 2010 The Gaea Times