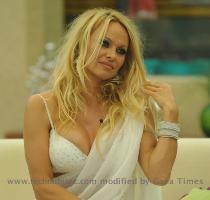 MUMBAI, INDIA (GaeaTimes.com)- In what might be the biggest day for the Indian reality TV fans, none other than Pamela Anderson entered the ‘Bigg Boss 4′ house in Wednesday. Charging a whopping 2.5 crore for a mere three day stint, the ‘Baywatch’ star was seen in a white sari with a sensual blouse that is sure to set the male hearts racing. The guys in the Bigg Boss house could not believe who they saw and hugged each other in joy.

Giving up her usual skimpy dresses Pamela Anderson dressed up somewhat like an Indian woman with bindi, bangles and jhumkas complimenting her white sari. While entering the house, the track playing in the background was ‘Babuji Zaara Dheera Chalo’, which set the tone for the evening. Pamela Anderson greeted the housemates with a ‘namaste’ and soon blended in with the Bigg Boss family.

Before entering the ‘Bigg Boss 4‘ house, Pamela Anderson spoke about her appearance on the show and said that she did not know any of the contestants and neither the host of the show, ‘Dabangg’ Salman Khan. She said that she was going unscripted on the show and was also ready to do household work. She also revealed that she is not a big fan of reality shows and has earlier been offered several projects in Bollywood. She said that she was ready to work if the Bollywood people shot in Malibu. She also said that she loved the color and song and dance that is typical of Indian cinema and it was the kind of movies that she always wanted to work in.