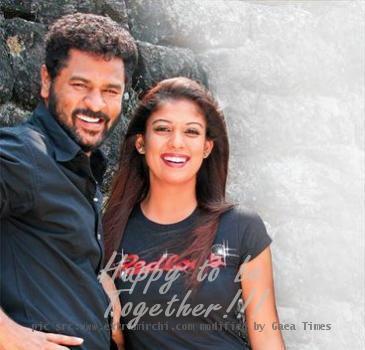 CHENNAI, INDIA (GaeaTimes.com) — Wedding bell rings for south actress Nayanthara. Speculation is doing the round that the sizzling diva of Tamil movie is going to tie the nuptial knot very soon. The groom is none other than actor-director Prabhu Deva.

According to reports the duo has been dating for the last two years. But this is the first time Prabhu Deva has confessed his love in public.

The actor, who is currently busy with the shooting of Santosh Sivan’s Urumi, declared that he would enter the wedlock with Nayanthara soon, though denied the speculation that they will get married before the end of this year.

Reportedly, Nayanthara will quit her acting career to look after her husband and family post marriage.

Prabhu Deva is already married to dancer Latha. But their relationship is not doing well these days, thanks to Nayanthara’s entry into Prabhu’s life. Prabhu is expected to file a divorce paper soon as he is planning to marry Nayanthara by the end of this year.

Inspite of Nayanthara’s much talked about tattoo that she etched on her wrist on Prabhu’s name, the actor remained tongue-tight about their relationship. But this time he openly took the secret out and expressed his deep love her for the beautiful actress, whom she referred as the oasis in his desert life.

September 17, 2010 (Sampurn Wire): It looks like a season of second marriages in Tamil film indust...

Prabhu Deva and Nayanthara to get married soon

September 14, 2010 (Sampurn Wire): Finally Prabhu Deva clears up the buzz on air about his affair ...

Boss Engira Bhaskaran Gets U Certificate

August 14, 2010 (Sampurn Wire): Ever since debutant Rajesh made a wholesome entertainer Siva Man...