Prabhu Deva and Nayanthara to get married soon 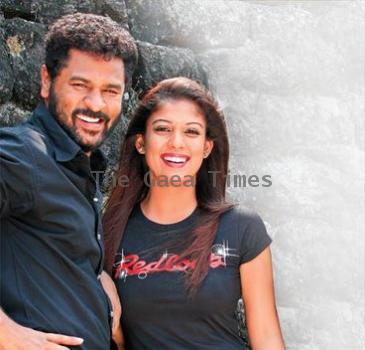 September 14, 2010 (Sampurn Wire): Finally Prabhu Deva clears up the buzz on air about his affair with Nayanthara. It has been a year long story about Prabhu Deva and Nayanthara’s relationship and now the choreographer-actor declares formally that they will be getting married shortly. Prabhu Deva cannot stop singing praises of Nayanthara as he says that she transformed his life completely.

The choreographer also adds that they have been showering unconditional love upon each other. When asked about Nayanthara quitting films about marriage, he said, “It’s up to Nayanthara to decide. She loves being at home spending more time with family.”

Recently it was Prakash Raj, who entered into nuptials with Bollywood choreographer, divorcing his first wife. In all likelihood, Prabhu Deva will soon divorce his first wife Latha with whom he had three sons – Vishal, Rishi and Aditya. His eldest son Vishal passed away due to cancer in 2008.

GUANGZHOU - The Indian pair of Sharath Kamal and Subhajit Saha entered the pre-quarters of the men's...

GUANGZHOU - The Indian men's and women's table tennis teams stormed into the quarterfinals at the As...

CHENNAI - Delhi seized the initiative and held the upper hand as they pegged Tamil Nadu to 122 for f...

CHENNAI - Virat Kohli again hit the purple patch with an unbeaten 119 as Delhi ended on 258 for thre...

CHENNAI, INDIA (GaeaTimes.com) -- The music of the much-awaited Tamil movie Engeyum Kadhal has been ...

CHENNAI - Following the arrest of two engineering graduates Wednesday in connection with the kidnapp...

CHENNAI - Two men, one a management graduate from Britian and the other an engineering student, were...