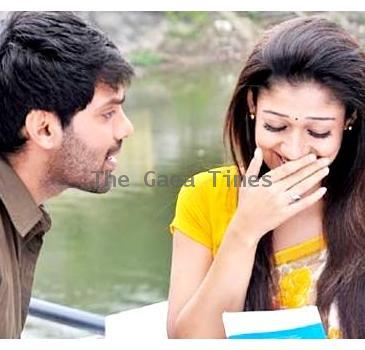 August 14, 2010 (Sampurn Wire): Ever since debutant Rajesh made a wholesome entertainer Siva Manasula Sakthi, the film buffs started looking out for the release of his next movie.

Nearly a year after the release of SMS, filmmaker Rajesh has completed shooting for his movie Boss Engira Bhaskaran. The film is produced by Vasan Visual Venture and is now acquired by actor Arya himself for his banner The Show People and producer Udhayanidhi Stalin of Red Giant Movies.

The film’s trailer was screened along with yesterday’s release Vamsam. The 2 minute trailer was enough to keep the audiences elated as the major portions had funny liners of Arya and Santhanam.

There happens to be a sequence where Santhanam says, “It’s really difficult to walk such a long distance to get a loan sanctioned”, for which Arya replies, “Just imagine, how many time the lender will walk to our places after giving us loan”.

Boss Engira Bhaskaran has Nayanthara performing the female lead role while Jeeva is expected to make a cameo appearance.