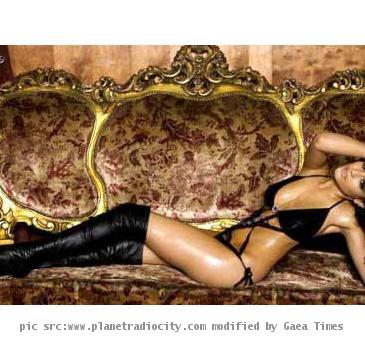 MUMBAI, INDIA (GaeaTimes.com)- Bollywood is all set top witness the oomph of yet another “Caterina”. However, this lady, is not the “firangi” girlfriend of any Bollywood hunk, but the cousin of none other than the most sizzling pop sensation, Jennifer Lopez. The very hot and young Caterina Lopez, has been featured in one of the raunchy item numbers for the film “Bhindi Bazaar”, which will be released on February 25.

Caterina Lopez reportedly wants to get an entry ticket to Hollywood, through Bollywood. One only needs to appreciate this hottie, as like many other aspiring actresses, she is not resorting to the good wills of a god mother, who in her case is one of the most powerful divas of the glamor world, Jennifer Lopez. Instead, she has made her own strategy, to make it big in the tinsel town. Caterina Lopez said that as soon as she was asked to get featured in the titillating item number, “taan ke seena…ho ja kameena”, she gave her approval without a second thought. As the name itself suggest, the song can be expected to be yet another sensuous number, with inviting lyrics. Her sultry Latino moves can add on to the X-factor, to make it yet another cult Bollywood item number, after that of our very own Munni and Sheila.

Caterina Lopez said that this was the best way to get familiar with the Hindi film industry. She added that the offer gave her a golden opportunity to visit Mumbai, which according to her is the New York of India, and make a mark in this industry. Caterina Lopez reportedly aspires to get featured in a full-fledged Bollywood flick very soon. However, it seems that her dream has every reason to come true, with her celebrated surname, which is perhaps her biggest back-up to bag the “Sex Symbol” tag, if not intense critical acclaims.

As war veterans return to prison and police work, counselors watch for signs of PTSD

San Francisco- Syfy has come up with the idea of rehashing an old but evergreen story in a new packa...
Copyright© 2011 The Gaea Times