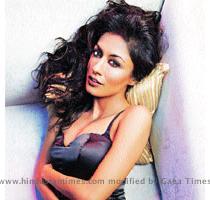 MUMBAI, INDIA (Gaeatimes.com)- Actress Chitrangada Singh will be seen once again hitting the silver screen very soon. The dusky actress who has made quite an everlasting impression on the audience with her acting prowess will be seen this time again in a Sudhir Mishra film. Her next film is titled “Yeh Saali Zindagi” where she plays a struggling singer who is trying to gain a foothold in the singing industry. It is nothing new that the actress considers Sudhir Mishra as her mentor for most of the films she has acted in belongs to the veteran director’s camp.

Chitrangada Singh had made her Bollywood debut in 2003 with Sudhir Mishra directorial “Hazaron Khwaishein Aisi” and then went on to act in “Kal: Yesterday and Tomorrow ” which was also under Sudhir Mishra’s production. The actress who is married to ace Indian golfer Jyoti Randhawa had taken a long break from films after her marriage and made a come back with Onir’s “Sorry Bhai” after devoting quite some time to her husband and son. The actress recently confessed her upcoming movie “Yeh Saali Zindagi” is a romantic thriller about two men who can go to any extent for the women they love. An interesting fact that she disclosed was that in the movie she has donned one particular outfit throughout the entire film. Sounds familiar with that of Kareena Kapoor’s one red saree look in “Chameli” isn’t?

The actress is known for doing few films. When asked on this Chitrangada Singh quickly replied that she loves to do fewer films and is extremely choosy about her films. No wonder in that for audience have already seen her carrying out slightly unusual humorous or intellectual roles in the movies she appeared. The actress is also now days visible in commercials of some reputed brands.

SRK, Aamir can make a difference to society: Chitrangada Singh

What Is Common Between Prachi And Chitrangada?

September 4, 2010 (Sampurn Wire): Apparently, there is nothing so common between the budding actre...