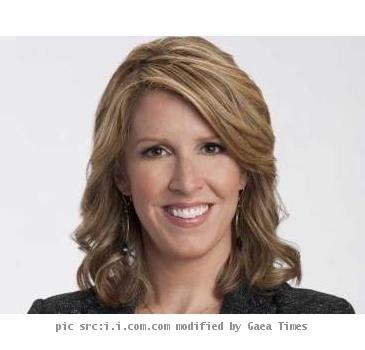 NEW YORK (GaeaTimes.com)- Heidi Jones, a weather anchor for WABC and Channel 7 has been charged with filing a false report as she lied to police about being raped. Heidi Jones, who is often seen in ABC’s “Good Morning America” previously told the police that she was sexually assaulted while she was jogging at Central Park in New York, last September. However, after investigation the police noticed some discrepancies in her stories and when they confronted her again, she admitted that she was faking.

The law enforcement officials said that Heidi Jones was charged for Class A misdemeanor on Monday. Police says, if she is convicted, Heidi Jones will have to face one year prison sentence or she has to pay a fine of $1,000. Moreover, reports surfaced that she has been suspended from her job as well. Heidi Jones complained on November 24 that when she was jogging in New York’s Central Park in September 24, a Hispanic man tried to rape her. She also said that she met the same man on November 21 and the man harassed her outside her apartment. The weather anchor said that the man was in his 30s or 40s. She said that two passers-by came to her rescue and saved her from that man.

However, when police opened the investigation, the first thing that came to their mind was that why Heidi Jones reported the whole incident one month later. After investigation, police found no clue about the man and when police confronted her again, she admitted that she was lying. A reputed media source reported that the meteorologist reportedly said that she was trying to get sympathy form people. On the other hand, Paul Callan, who is Heidi Jones’ attorney, said that his client would plead not guilty.

LONDON - Celebrity mums like Heidi Klum, who get back in shape just after weeks of giving birth are ...

NEW YORK - Heidi Montag and Spencer Pratt might be back together, but the couple's financial conditi...

Montag, Pratt on the verge of bankruptcy

LONDON - Singer Kerry Katona fears losing her children in a custody battle with her ex-husband Mark ...
Copyright© 2010 The Gaea Times