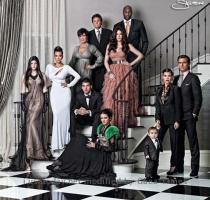 LOS ANGELES (GaeaTimes.com)- The Kardashian clan has unveiled their family photograph for this year’s Christmas card. No wonder it is absolutely a glamorous one. With the onset of the festive season the Kardashians have not wasted any time in delaying for their special appearance. The family Christmas card is in itself is a very big indication of how big preparations are going on in the Kardashian household for the forthcoming festivities.

The photograph in the annual family Christmas card shows eleven members of the Kardashian-Jenner clan who look glamorous from every inch. The family photograph has been taken by well known photographer Nick Saglimbeni who also did the debut photo shoot of Kylie Jenner and Kendall Jenner. Kim Kardashian is as usual looking stunning in the white body hugging Emilio Pucci dress which has been matched rightly by a pair of vintage earnings. The photograph also includes her mother Kris Jenner , step father Bruce Jenner, Khloe Kardashian along with her husband Lamar Odom. Sister Kourtney and hubby Scott Disick made the family picture perfect by posing with their little son Mason who recently turned 1. Kim Kardashian’s half sisters Kylie and Kendall Jenner also added their glamorous presence.

According to Khloe Kardashian and others it was Mason in a pinstripe suit who did the magic for the group photograph. Looks like little Mason’s aunts cannot hide their excitements about him. Posing for the Christmas cards is something that is a big event for all of the Kardashian family members. Khloe Kardashian just could not stop gushing about this recent photo shoot and came up declaring that this year’s Christmas card has been her favorite till now.

Kardashian's dilemma over her assets

LONDON - Socialite Kim Kardashian reveals she used to be in a dilemma over the size of her assets. ...

NEW YORK - Sister of Kim Kardashian, Kourtney, is all set to make her acting debut - she has ...