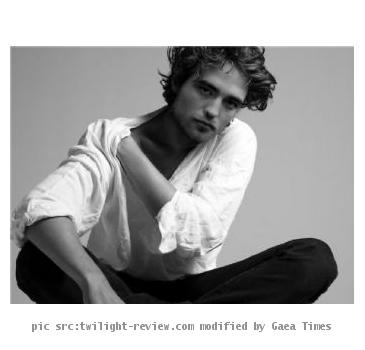 LOS ANGELES (GaeaTimes.com)- The numerous fans of Robert Pattinson, one of the hottest actors of Hollywood have another reason to feel elated now! So far they have been gushing about how gorgeous their idol looks in those amazing bathing pictures taken on the sets of Breaking Dawn, the last film in ‘Twilight’ Saga. The official trailer of the upcoming film of the hunky actor named ‘Water For Elephants‘ has surfaced in the web and it has made waves among his millions of fans as one can understand. The fans will see the actor in an all new avatar in this film, where he does not have superhuman strength and neither flashes his fangs! The young actor who achieved extraordinary super stardom with the release of the films in the twilight series is now trying to do something outside the vampire romance.

The film ‘Water For Elephants‘ also star ace Hollywood actress Reese Witherspoon and Oscar winner Christoph Waltz along with the Twilight star. The upcoming film has been adapted from a novel written by Sara Gruen. The film shows the story of a struggling young man named Jacob Jankowski who is forced by situations beyond his control to discontinue a veterinary course and get involved with a circus. There he meets the character of Marlena Rosenbluth a beauty who is married to a temperamental animal trainer August Rosenbluth. The chemistry that develops between the duo sets the plot in motion.

‘Water For Elephants‘ has been directed by ace director Francis Lawrence of ‘I Am Legend’ fame. It is going to be released in April 5th 2010. this will be an important release for the Twilight actor who can prove his acting skills outside the vampire romance saga.