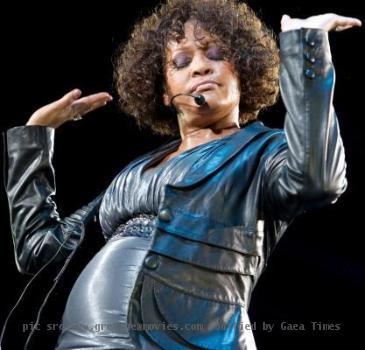 LOS ANGELES (GaeaTimes.com)- Is Whitney Houston Pregnant? At least that is what the latest speculation says. The rumor, emerged after the 47 year old singer appeared for the BET’s Celebration of Gospel, that was aired on Sunday. The singer wore a tiny body hugging gray dress, that was tight around her tummy. It was so fitted, that it revealed her excessively enhanced middle section, to give an illusion of her pregnancy.

However Whitney Houston was herself not available to confirm the news by herself, and therefore, the speculation can still be treated as a rumor. Many people think that Whitney Houston cannot be pregnant, as she is still undergoing her treatment for drug and alcohol abuse. Moreover, at the age of 47, not too many woman are biologically capable of conceiving. So is her apparent big tummy a result of over eating? According to many sources, that could be one of the reasons. However, others are wondering, that even if Whitney Houston is pregnant, who is the father of the baby. The singer already has a sixteen year old daughter, named Bobby. To negate the rumor a step further, sources say that after the drug abuse, followed by a proper medical treatment, the otherwise skinny and thin singer has finally gained some weight. This is nothing but a sign of her good health and proper life-style. It could also be the result of age related weight issues.

Reportedly, Whitney Houston is suffering from respiratory problems, and as a result, she regularly consumes some steroid injections for her treatment. Even this may lead to rapid weight gain. Similarly, her enigmatic tummy, may also be a result of her tightly fitted dress or the camera angle. No other sources were available, who could confirm whether Whitney Houston is pregnant or not. However, is she is, then hats off!