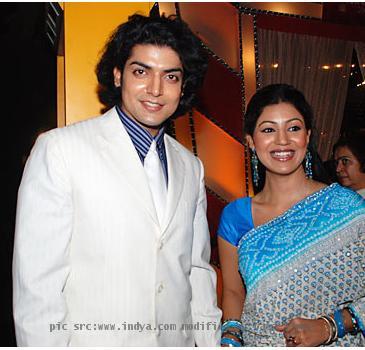 MUMBAI, INDIA (Gaeatimes.com)- The on-screen Ram and Sita, might have tied the knot in the show itself, and their on-screen mock knot dissolved as soon as the show went off air. However, the on-screen couples of the show, Debina Bonnerjee and Gurmeet Choudhary, soon brewed real-life love too. After going steady for several months, they have finally decided to tie the knot.

Debina Bonnerjee said that the marriage might take place in February, however, she did not disclose the exactly date or other details of her wedding. Reportedly, the beautiful bong actress went to Argentina, to shoot for her next reality show, “Zor Ka Jhatka”. When the tiring shooting schedule got over, she returned to Mumbai, to decide to go on a vacation in Goa, with her beau, whom she met after really long. Perhaps the distance got them closer and so did the romanticism in the sultry air of Goa. On the other hand, Gurmeet Singh’s life seems to be on a roll too, as after getting married on screen in his daily soap “Geet”, he is all set to do the same in his real life.

Debina Bonnerjee and Gurmeet Singh were deeply in love, ever since they were shooting for “Ramayana”. They appeared on screen for the second time together in the reality series “Pati Patni or Woh”. Debina Bonnerjee proved herself to be an extremely caring and loving mother through the show, with her home management skill. Back then, Gurmeet Singh proposed her for marriage with a beautiful diamond ring, for the first time. However, dedication towards their individual career, did not make their way to the aisle. Now that the couple is ready to tie the knot, one can only wish them good luck!

Holiday Spree for Gurmeet and Debina

Gurmeet Owes Everything to His Fans

July 12, 2010 (Sampurn Wire): Debina Bonerjee is one of those women who admire seeing her man with...

Debina In Search Of Hyderabadi Damaad