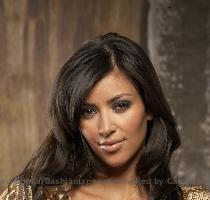 LOS ANGELES (GaeaTimes.com)- Reality star Kim Kardashian is encountering a lot of hardships on her new reality show “Kourtney and Kim Take New York” that started off recently on E! Fans of the bombshell saw her crying in the latest series as she came across a photograph of her on the cover-page of W magazine. The photo revealed a naked Kim Kardashian with a few strips of texts in between which covered her assets.

Audience saw an upset Kim Kardashian burst out in tears after she was shown the cover page of the W magazine. Kim Kardashian, however, claimed that she had done the photo shoot thinking it to be an arty photograph. She accused the organizers of having cheated on her by violating her modesty in this way. As the other two sisters Kourtney and Khloe tried to console Kim Kardashian, she cried to them saying that she has been made to look fully porn in this way. She added that even the photo shoot that she did for Playboy magazine made her look less nude. She even vouched that she will never take off her clothes even if a magazine like Vogue demands her to do that. Inside the magazine pages showed Kim Kardashian nude only a coating of silver paint clad her body.

Not being able to deal with the emotional setback she straight away called her mother Kris Jenner in Los Angeles and narrated what she had seen on the cover-page of W Magazine. Her mom however, held on her calm and was seen advising Kim Kardashian to held her high high. Kris Jenner told Kim Kardashian to own those photos. The phone call worked out and audience next saw the hottie boldly saying that she was indeed proud to have posed for that picture.