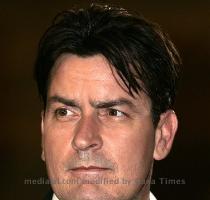 LOS ANGELES (GaeaTimes.com)- The Screen Actors Guild Awards 2011 saw some one missing whose friends were seen confessing that they were indeed missing him. The man is no one but popular television actor Charlie Sheen who remained away from the mega event as he is currently undergoing a rehab session. The 45 year old actor was admitted to the rehab after his health took a back step after he was seen suffering from hiatus hernia.

It was pretty evident how much friends and fans of the “Two and a Half Men” star were missing him at the 17th Annual Screen Actors Guild Awards that was held at the Shrine Auditorium, Los Angeles on Sunday night. The funny man was admitted in the rehab last week itself. His co-actors and friends were seen expressing their deep concern for him, sending their best wishes for the actor. Actor John Krasinski of “The Office” told the media that it was not only him but everyone else who were missing their friend Charlie Sheen at the event. he added that he hoped to see him soon.

Julie Bowen of the “Modern Family” fame said that she was absolutely sure that the actor in no time will be fit and fine and will once again be back. She said that Charlie Sheen is someone who is known to be a survivor which is why she is not worried about him. From what came up at the recent Screen Actors Guild Awards 2011, it was clear that the actor was badly missed by all his peers. It is for sure that it was not just colleagues who are missing him, but fans too are wishing for the actor to get well soon.

DHAKA - An India cultural festival with art exhibitions as well performances by Indian artists is be...
Copyright© 2011 The Gaea Times