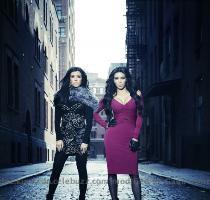 NEW YORK CITY (GaeaTimes.com)- The Kardashian hotties are back once again. Last night marked the start off of one more Kardashian reality show after the “Keeping Up With The Kardashians” and “Kourtney and Khloe Take Miami”. Yes this time the sisters are ready to take off the Big Apple with their new show named “Kourtney and Kim Take New York”. The show premiered last night on the exclusively entertainment channel E!

The first episode of “Kourtney and Kim Take New York” kicked off with the sisters inviting Kayne West to visit them for offering them some advice on the launch of their store Dash. The rapper visited the girls and more than offering them his advice was seen going for a flirting session with Kim Kardashian who too was enjoying it with her positive nodding. Kim Kardashian infact invited the rapper on the show for her birthday party in the Sin City. Kim Kardashian all over the show was seen dropping hints to the men that her recent status was single and insisted the guys to indulge in a good amount of flirting with her. Kim Kardashian recently has been in the news for her affair with New Jersey Nets player Kris Humphries.

On the first day itself Kim Kardashian bumped into an friend of hers named Michael Copon with whom she had starred in “Beyond the Break”. As the two engaged in a close conversation, Michael Copon was seen getting close to Kim Kardashian but pulled herself away when he tried to kiss her. Next on “Kourtney and Kim Take New York” audience witnessed some differences between the two sisters as Kourtney Kardashian’s boyfriend Scott Disick came to stay in with Kourtney Kardashian in the hotel which annoyed Kim Kardashian. Kourtney kardashian however, promised that nothing like this will happen from the nest time onwards.