‘Mega Python Vs. Gatoroid’ Gets Snubbed 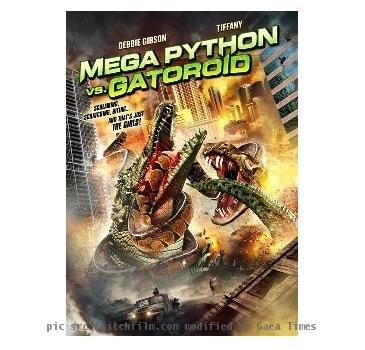 LOS ANGELES (GaeaTimes.com)- SyFy Network is known for making and showing movies featuring gigantic monsters and sci fi beasts that love gorging on humans like anything. To be truthful some of their monster flicks like Sharktopus and Dinocroc made for good weekend watches. However, things do get out of hand when two such monsters lock horns in one movie. This is precisely what has happened to the latest Syfy flick ‘Mega Python Vs. Gatoroid’ which was shown yesterday night. The name of the movie indicates that it deals with two monsters developed by scientific experiments. The CGI and special effects used in the movie may be nice but a movie cannot thrive only on the visual effects. The poor plot and uninspired acting by almost all the actors in it leave much to be desired.

In the new Syfy flick ‘Mega Python Vs. Gatoroid‘ yesteryears singing sensations Tiffany and Debbie Gibson are pitted against each other. It can be funny watching them fighting with each other but the fight basically distracts you from the plot for a while. They are also seen mouthing some of the choicest expletives at each other in the movie. While Tiffany plays a park ranger feeding the alligators with steroid, Debbie Gibson essays the character of an animal activists who lets loose pythons in Everglades. Initially the monsters wreck havoc and the effects are eye catching but after a time their rampage on the screen tends to get repetitive.

In ‘Mega Python Vs. Gatoroid‘ Desperate Housewives star Kathryn Joosten also makes an appearance. At the end the movie seems like an average fare.