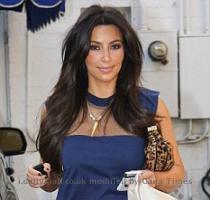 LOS ANGELES (GaeaTimes.com)- Glamor and sports could never abstain themselves from mutual attraction. Beauties from the tinsel town and athletes from the sports world have created the most beautiful couples in the history. The latest to add in this list are Kim Kardashian and New Jersey Jets forward Kris Humphries.

A source has said that two new couple gels along really well and are having a lot of fun together. However, they are also giving the relationship some time and taking it slow. Recently Kim Kardashian, 30 was seen showing public display of affection to her new beau at Hoboken, New Jersey. According to the reality star, Kris Humphries is more normal, a lot of fun and cute. He is just the perfect person to give Kim Kardashian what she is looking for in a relationship right now, which is fun, and some good time. It is also said that the highest paid reality star opted for a more inconspicuous athlete, in order to avoid too much media attention and paparazzi bug.

Kim Kardashian was initially dating the ex- boyfriend of Halle Berry, Gabriel Aubry. However, their relationship has already come to an end on mutual terms. Reportedly, they are still in touch and talk with friendly terms. A source has said to a reputed magazine, that Kim Kardashian feels that Gabriel Aubry was simply using her for fame, just like what he did with Halle Berry, with whom he even had a kid, Nahla. She also thinks that Gabriel Aubry, 34 is older than what she is looking for. On the other hand, Kris Humphries, 25, is youthful and more fun to be with.

MELBOURNE - Kris Smith has denied reports that he and girlfriend Dannii Minogue have got eng...

NEW YORK - Famous Hollywood celebrities have made some astonishing confessions at the New Yorker Fe...

NEW ZEALAND - Kiwi developers, who developed a device that may give fresh hope to stroke and brain i...

WASHINGTON - A US citizen of Pakistani origin was arrested Wednesday on charges related to plotting ...

Kim Kardashian says she has 'mixed feelings' about turning 30

WASHINGTON - Kim Kardarshian has revealed that she has mixed feelings about turning 30. The reality ...
Copyright© 2010 The Gaea Times