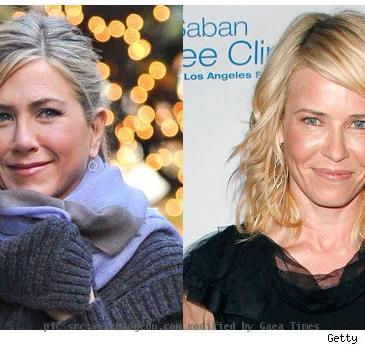 Los Angeles (GaeaTimes.com)- Could there be a better way to thank your friend than by bad mouthing her biggest foe, who stole her husband and wrecked her home? Recently, the two famous BFF of the Tinsel town, Chelsea Handler and Jennifer Aniston, probably got the biggest satisfaction of life after they vented their spleen on Angelina Jolie, who was responsible for the real life break up of Jennifer Aniston and Brad Pitt a few years ago.

Chelsea Handler, who is generally known for her outspokenness and straight forward attitude, said it clearly that Angelina Jolie is a “B****”, who does not have any female friend in Hollywood because she is a home wrecker. A source has reported that Chelsea Handler hates Angelina Jolie and has no respect for her despite her apparent media image that portrays her as a woman who rescues needy children around the world. The source also said that every one in Hollywood is scared to say what they actually think about Angelina Jolie, except Chelsea Handler. The latter told in a show that Angelina Jolie can rescue as many babies from as many countries as she wants to, but she would not believe in her honesty. That is because, according to her, she is still the same (C***) woman, who stole Brad Pitt from Jennifer Aniston and wrecked her home. To her, Angelina Jolie is only “F*****g c*** and a f*****g b****”.

At the same time Chelsea Handler only had good things to say about Jennifer Aniston. She said that her BBF is still fabulous in her 40s and needs to paint the town red. She should therefore stop sitting at her home all alone with her dogs, and have quiet dinners with Courteney Cox and the female biddies. She wants her to get out of the trauma soon and get a new life. Now that is what we call living up to the term “BFF”, even if that mean maligning others reputation, for the sake of your pal.

LONDON - Chelsea skipper John Terry could be back in action in just a few days after fears were ex...

LONDON (GaeaTimes.com)- It takes a lot of luck to be connected with the British Royal family. ...

LONDON - Chelsea's ace striker Didier Drogba is not like any other footballer indulging in extravaga...

Terry says not bitter or angry about losing England captaincy

LONDON - Chelsea skipper John Terry has said that he is not bitter or angry about losing the Englan...

LONDON - Jack Wilshere, the 18-year-old England footballer, went behind his girlfriend's back for se...
Copyright© 2010 The Gaea Times