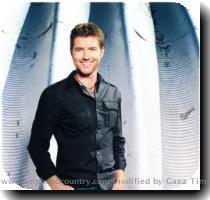 LOS ANGELES, (GaeaTimes.com)- Josh Turner seems to be on a roller coaster ride right now. After bagging five awards at the American Country Awards, he is all set to witness the overwhelming reactions of the people, as he has recently released his new music video “I Wouldn’t Be A Man” on Youtube.

The video stars his wife Jennifer Turner along with him. The video is his own rendition of Don William’s classic track. This would be the third single, released from his latest album “Haywire”, which was released in February. The album was consistently placed at no.5 for several weeks in the Billboard 200 chart. The radio started playing this song from October 25, to place it at number 44 on the Billboard Country Songs chart. Josh Turner attributed the success of his sing to his masculine and passionate vocal delivery. He also said that the whole album is filled with positive energy, that would drive people groovy and make them dance. He said that he sang each of the songs in the album with the fullest effort to impart the maximum passion possible. According to him, all the songs from this album are very different and its feel came out through the passion in his voice.

That is the reason why “Haywire” was nominated for the American Country Awards, for the Album of the Year category. Another song from the album, ‘Why Don’t We Just Dance’ was also nominated for the Best Single and Music Video of the Year category. In total, Josh Turner bagged five different awards from this event, because of “Haywire”. In such a scenario, the release of yet another passionate video from the album, would just be a cherry on the icing.