Susan Boyle Was Embarrassed On “The View” 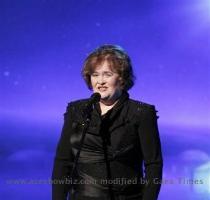 LOS ANGELES (GaeaTimes.com)- Susan Boyle has always been known for her melodious voice and wonderful singing. The “Britain’s Got Talent” alum has never disappointed her audiences with her performances so far. However, it seemed that yesterday was just not the best day of her life, as she cracked her voice while performing live on “The View”.

Susan Boyle was on the show for the promotion of her album, “The Gift”. She was all set to treat the ears of her audiences with her holiday classic “O Holy Night”, which has been re- recorded for this album. However, the moment she started singing, her singing got distracted with her cracked voice. Although she tried to give it another shot, her damaged throat could not make her performance for more than 20 seconds. After the performance she was left with utter embarrassment as she is one of the top most singer right now, with a huge fan following. The two hosts of “The View”, immediately came for her rescue to save her from the apparent embarrassment. It could be understood from the singers expressions that her voice was troubling her while she was singing. However, when “The View” was aired on television, this particular part was edited, from the episode.

Some sources say that the poor performance of Susan Boyle on “The View”, was due to the rigorous schedule for the last few days. She has been in New York and performing all over the city for the last few days. More over, she is not a main stream singer, but an ordinary person, from an ordinary background, who recently entered into her celebrity status through a reality show. On that note, considering her previous performances, this mishap can be pardoned. Fortunately, even the audiences at “The View” set also felt the same, as they continued to cheer the star after she ended her incomplete performance.

Susan Boyle sings her way into records with second album