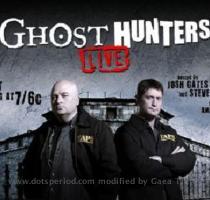 LOS ANGELES, (GaeaTimes.com)- Halloweens was a huge day with all the spooky fun around. However what was even better was the way the day ended. Sify aired a live six hours show, especially dedicated to Halloweens day. “Ghost Hunters Live Presented by Dodge” started at 7PM in the evening and ran till 1 AM ET/PT.

This special episode of “Ghost Hunters Live” gave a scarier dose to the audiences, as the crew visited the infamously haunted and abandoned location, Buffalo Central Terminal in Buffalo, New York. This railway terminal was built in 1929 and was abandoned in 1979, just 50 years later. Since then, it has just been a lying haunted terminal in New York. The place is the abode of several spirits and the local people are scared to visit that place as many of them have witnessed a host of paranormal activities in that location. The decayed art deco masterpieces are reportedly haunted. Till now about 17 paranormal events have been reported from the Buffalo Central Terminal and people are scared to visit the location alone. However, that is not the case for the “Ghost Hunters Live” crew visited the location and investigated it for six hours.

The “Ghost Hunters Live” crew included the normal members like Grant, Kris, Amy, Steve, Tango and Jason. However, to make it more exciting, Josh Gates, famous for traveling to the haunted locations and exploring various sightings of strange phenomenon was also invited. He was accompanied by Allison Scagliotti, popularly known as Claudia on “Warehouse 13″ and Kofi Kingston of the Smackdown. Sify will also launch its new iPhone application, coordinated with this six hours live show, to enable more interaction from the part of the audiences.