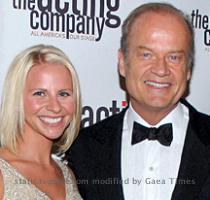 LOS ANGELES (GaeaTimes.com)- Kelsey Grammer is on cloud nine as he is engaged with his girlfriend, Kayte Walsh. It seems that the wedding bell is going to ring for the third time in the ace actor and comedian’s life. The 55 year old Kelsey Grammer, for the first time talked to the media about his relationship with his 29 year old girl friend.

The couple seems to be really happy with their courtship and some sources (who do not believe in age bar) think that they really look happy together. The actor’s representative told one of the leading magazines that the couple is engaged and are happily in love. He also said that they refused to be open about this relationship to the media before because, they wanted it to be discreet and enjoy the romantic moments and the good news in privacy. However, despite the new love in the air, the personal life of Kelsey Grammer does not seem to be very static. He is still going on with divorce case with his ex- wife, Camille Donatacci, to whom he was married for 13 years. The “Real Housewives of Beverly Hills”, was his third wife. Kayte Walsh would be his fourth wife.

The news of Kelsey Grammer’s engagement with Kayte Walsh came up, when the latter was spotted sporting a diamond engagement ring at the Kennedy Center Honors in the weekend. However, after that incident, her beau did not take much time to confirm the speculation as true. Kayte Walsh, a British flight attendant, has been into this relationship for quite sometime. Last fall, she got pregnant, with the couple’s first child. Unfortunately, she had to undergo a miscarriage.

FRASIER star KELSEY GRAMMER is considering marrying his pregnant girlfriend as soon as he finalises ...

Grammer's Wife 'to Get Half His Fortune'

KELSEY GRAMMER's estranged wife stands to receive half of the TV star's fortune - a staggering $40 m...