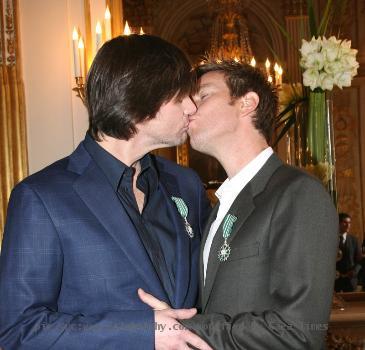 LOS ANGELES (GaeaTimes.com)- Those who used to think ace comedian and actor Jim Carrey is heterosexual could reconsider their opinion about him if they see his upcoming flick ‘I Love You Philip Morris’ where he plays a conman who falls for a fellow inmate in prison. Not only the actor plays a gay character on screen in the film he has also done some erotic love scenes with his male co actor. A lot of women would love to kiss Ewan McGregor the hunky Scottish co actor in the film but Jim Carrey was the one who got to lock his lips with the gorgeous actor. The ‘Mask’ actor said in an interview in recent times that the kissing and lovemaking scenes did not make him feel awkward at all. On the contrary he actually enjoyed kissing his beautiful co actor in the film. This is commendable for the actor who is known mainly for his comic skills.

The remark of Jim Carrey may break the hearts of his female fans as he said on the kissing that for him it was ” a dream come true. I mean, look at the guy. I have to say, he is a great kisser.” Jim Carrey also said that when he was kissing and making love to his male co actor in the film, he did not think about it from the typical heterosexual perspective. Both the actors said that they enjoyed each others company and also liked shooting for the film.

The Latest Push for Web Privacy in US is Welcome

The Advocacy group welcomed the recent move by US Govt for web privacy with new laws and new watchd...

TORONTO - Even before it launches its PlayBook early next year, BlackBerry maker Research In Motion ...
Copyright© 2010 The Gaea Times