Grace Potter Performs For The Troops 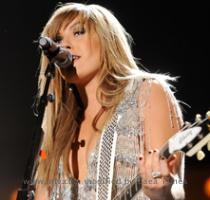 SAN DIEGO (GaeaTimes.com)- The Marine Corps Air Station Miramar in San Diego witnessed the creation of a history, as several music divas saluted the troops with their special performance “VH1 Divas Salute the Troops”. By singing some of their great songs, these music Divas paid a tribute to those men and women, who serve the country with their valiance and unconditional loyalty. The divas who performed for this special show were Katy Perry, Nicki Minaj, Keri Hilson, Paramore and Sugarland. However, they were also backed up by Grace Potter & The Nocturnals.

Grace Potter bifurcated her vocal duty with Ann Wilson, the front-woman of Heart. Nancy Wilson Kicked off the show to drive the servicemen wild, as she struck her first chord to sing “Crazy”. Ann Wilson added more air to the fire, as she entered the stage from the runway to catch the first verse of the song. Grace Potter who was in charge of the keyboards, supported Ann Wilson from the second verse and then met her in the middle of the stage to pump up the high spirited performance and take it forward. The also made the event more memorable with their groovy single “Paris (Ooh La La).” However, amidst all, it was Katy Perry, who got the maximum footage and recognitions ans she performed on one of her biggest hit, “Fire Works”.

The event was organized by MTV, and the audiences, mainly consisting of the navy men and their families, who appreciated their joint efforts. The ladies performed in an air hangar in front of a large troop. Sources from MTV has said that Grace Potter and the other singers dedicated this song to everyone working in the military around the world. The show was aired yesterday at 9PM on VH1.