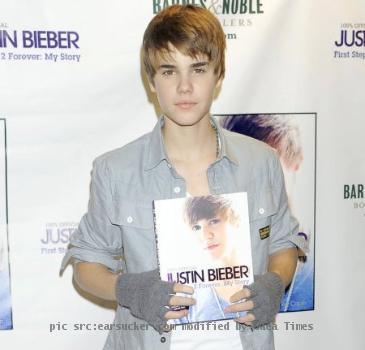 NEW YORK (GaeaTimes.com)- The teen sensation and winner of 4 AMA Awards, Justin Bieber showed up at a Barnes & Noblen store on Friday in order to promote his new book “Justin Bieber: First Step 2 Forever: My Story”. The singer seemed happy while speaking to everyone on the show and also signing autographs for his fans. However, more than the much anticipated book what caught the attention of the media was Justin Bieber’s new hairstyle. The web has been abuzz since morning with Justin Bieber’s new haircut and it has surely taken his female fans by surprise. On the other hand, a source close to the singer said that Justin Bieber did not get rid of his locks but he just tricked his fans by brushing his head in the opposite direction.

All the websites and social networking sites went crazy with speculations about Justin Bieber’s haircut. People have been scrambling on web to get a glimpse of the new look of the star. Scooter Braun, who is an active member of Justin Bieber’s crew revealed the truth media. In his interview to a reputed media source, he said that Justin Bieber told him in the morning that he wanted to have some fun supposedly by confusing the media. Scooter Braun said that the “Baby” singer brushed his hair in the opposite direction and the whole world came to a conclusion that he had a haircut.

Scooter Braun said that Justin Bieber had no haircut. He jokingly said that the teen heartthrob just needs to shake his own head to get back to his usual look but for him somehow it was astonishing that the whole world could not figure out his prank. However, Justin Bieber’s new book “Justin Bieber: First Step 2 Forever: My Story” is about his young age, his YouTube videos, his mentor Usher and also his rise to fame and stardom.