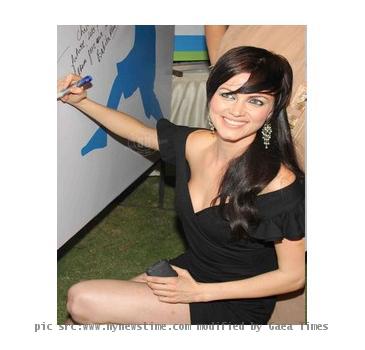 MUMBAI, INDIA (GaeaTimes.com)- It seems that Czechoslovakian born Indian model Yana Gupta has got back the popularity of her “Babuji Zara Dheere Chalo” days after her pantyless stunt at a children’s charity function. The photographs of the event are still a rage in internet as the netizens are still scrambling on web to get a glimpse of Yana Gupta sans her underwear. She even faced legal lawsuit for obscenity in a public place. However, all these controversies acted as a boon for the model as a UK based man’s magazine is offering her Rs. 1 crore to go nude for their cover, the gossip portals report.

Yana Gupta’s only claim to fame was her item song “Babuji Zara Dheere Chalo” and then the bombshell slipped into oblivion. It seems not only in India but also the pictures have gained its popularity internationally as well. Yana Gupta has not yet commented anything about the whooping one crore deal. The media outlets are of the opinion that if Yana Gupta accepts the offer then it would be another turning point in the Bollywood item girl’s life. On the other hand regarding her pantyless stunt she reportedly said that she could be a brand ambassador for an underwear which will have a tagline “I’ve got them NOW”!

LONDON - The public release of the genome of the cacao tree - which produces chocolate - will not on...