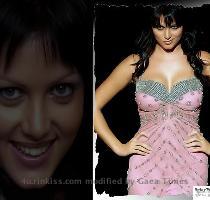 MUMBAI, INDIA (GaeaTimes.com)- It looks like the Bollywood hotties are treading the same path as the Hollywood ones when it comes to attending events without their innerwear. The latest celeb to join the bandwagon of being clicked without panties, is Yana Gupta. For all those whose hearts skipped a beat, when the item girl gyrated to ‘Babuji Zara Dheere Chalo’, it is time for the hearts to stop beating completely as the bombshell has been caught in a wardrobe malfunction scandal. The Czechoslovakia born Indian model was photographed at a charity event recently and it looked like she forget the bare essentials at home. To top it all, the charity event was meant for children.

In spite of her best efforts to hide her modesty, Yana Gupta ended up serving a treat for the photographers at the event. Initially, the star refused the photographers but the relentless paparazzi kept clicking till they discovered something special about the item girl. Yana Gupta tried in vain to cover up for the lack of underwear under her revealing short black dress but the truth managed to peep out. The wardrobe malfunction has been a rage on the web ever since.

Earlier this year, Bollywood Actress Shamita Shetty was photographed in a similar manner and it sent her popularity up. Though Yana Gupta has been out of the limelight for quite a while now, the new wardrobe malfunction photos are sure to boost her popularity on the web. In Hollywood celebs like Paris Hilton, Lindsay Lohan, Katherine Heigl and Eva Mendez have been victim of innumerable gossip after a wardrobe malfunction. Among Indian celebs, model and reality star Carol Gracious had by far the most publicized wardrobe malfunctions which occurred while was walking the ramp.