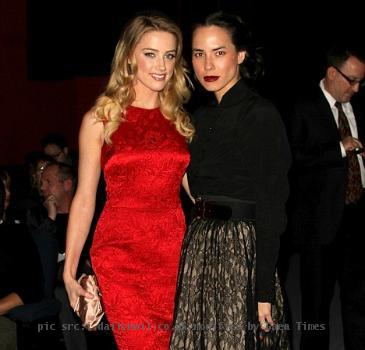 LOS ANGELES (GaeaTimes.com)- The “Pineapple Express” actress Amber Heard publicly came out on the 25th anniversary of GLAAD (Gay and Lesbian Alliance Against Defamation) event on last Friday. She attended the event with her girlfriend Tasya van Ree, an artist and photographer, whom she has been dating since 2008. However, the actress said that she felt it was the perfect time for her to speak openly about her personal life.

Amber Heard thanked GLAAD for giving her a platform for opening up who she is. She said that it was for GLAAD that people changed their opinions, were influenced and engaged to do chose the best thing for them. She said that she had to ask herself an important question like if she has become the part of society’s problem. She said that she felt that by coming out she would become a problem of the society. However, later she could not stand by the injustice she was doing to herself and chose to speak out about her priority. Amber Heard sounded confident when she said that if someone denies or hides something then that person “inadvertently” admits that she is wrong.

Amber Heard also said that she feels she is absolutely right when she admits about her true orientation. The gorgeous actress also said that she feels million other people are also right when they speak for themselves and decide their priority. While speaking out her partner Tasya van Ree, “The Rum Diary” actress said that the former is so beautiful that anybody would want to go out with her. Amber Heard’s new movie “Drive Angry 3D” is all set to hit the theaters on February 25.

KARACHI - Karachi may witness ethnic cleansing like that in Bosnia, if the government continues its ...

IPhone app that lets you 'scan and taste' beer!

Amber Tamblyn To Act In "House"

LOS ANGELES, (GaeaTimes.com)- "House" has been getting a bit dull and monotonous as most of it...

Amber and Angela Cope: Twin Sisters to Debut in NASCAR

Martinsville (GaeaTimes.com) -- First ever in NASCAR history, that a set of twins Amber and Ange...

Driver cuts off truck of suspect accused of abducting Fresno, Calif., girl and she gets away

Police ID suspect in kidnapping of Calif. girlFRESNO, Calif. â An 8-year-old girl who was abduc...
Copyright© 2010 The Gaea Times