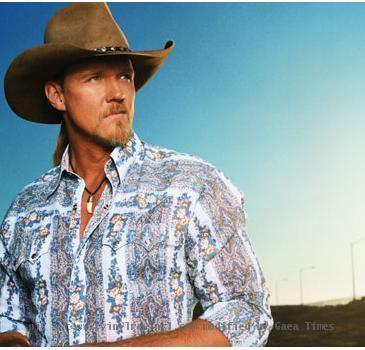 LAS VEGAS (GaeaTimes.com)- It was the inauguration of annual American Country Awards last night at the MGM Grand Garden Arena in Las Vegas. The two hours program was aired on Fox network and the audience loved the performances of their favorite Country music artists. Veteran Country Music artist Trace Adkins hosted the gala event along with Nancy O’Dell and the audience had a lovely time enjoying the show on television. Trace Adkins also received award for Music Video of the Year and Male Artist Video of the Year along with Blake Shelton for the hit song “Hillbilly Bone”.

The singer previously said that Award functions are like family reunions where the artists can catch up with each other and have fun. Trace Adkins said that he is looking forward to American Country Awards as a challenge as he has never done anything like this before. He admitted that this is for the first time he would go outside his comfort zone and do something different. The country music artist managed to live up to the expectation of the audience with his witty remarks and gigs. It was quite surprising for the audience as his thanksgiving speech was short and the artist just thanked his fans for their support.

Trace Adkins gave the final performance of the night and even before his performance the producers thanked him for his contribution in the American Country Awards as a “co-operative host”. Rascal Flatts wowed the audience by playing many hit songs and later he was also awarded Country Group of the Decade award. Renowned singer Alan Jackson also performed on the stage. The other renowned celebrities, who graced the red carpet are Rodney Carrington, Blake Shelton, Laura Bell Bundy, Comic Jeff Dunham, Jason Aldean, Rodeo Star Ty Murray and NASCAR Drivers Clint Bowyer, Elliott Sadler and Michael Waltrip, to name a few.

Mystery of missing stars in Universe may finally be solved

WASHINGTON - Star births in the Universe occur round the clock and according to calculations, we ...

HOSHIARPUR - Two of the six minors who had escaped from a juvenile home here in Punjab were traced F...

KOLKATA - A Mercedes Benz, a war booty from the 1971 India-Pakistan clash that led to the liberation...

MELBOURNE - A 56-year-old Russian mother told airport officials in Russia that her daughter was a su...