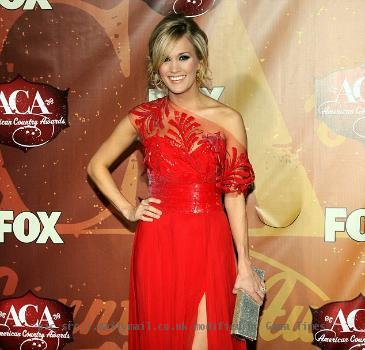 LAS VEGAS (GaeaTimes.com)- It was the night of the first annual American Country Awards where who’s who of the country music fraternity graced the show with grace and elan. The gala event took place at the MGM Grand Garden Arena in Las Vegas on Monday. Even the FOX channel audience also got a chance to see the two hours show where the fans vote for their favorite singers. Undoubtedly, the queen of the night was country singer Carrie Underwood who nabbed six prestigious award of the night.

Carrie Underwood walked the red carpet dressed in a beautiful asymmetrical red gown and the blonde bombshell was happy and excited about one of the most important days of her life. Trace Adkins hosted the inaugural ceremony of American Country Awards. Carrie Underwood grabbed the award for Female Artist of the Year, Album of the Year for “Play On” and Single of the Year by a Female Artist for “Cowboy Casanova to name a few. The winner of “American Idol” season 4 expressed her gratitude towards her fans and while receiving the award, she said that the Country music industry one of the most amazing year. The singer also thanked the audience and fans for who recognizes and appreciates the artists.