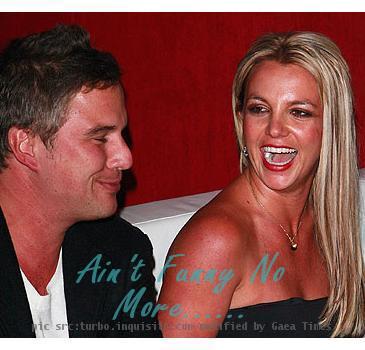 LOS ANGELES (GaeaTimes.com) — Everyone knows how much stars hate paparazzi, although they practically can’t live without it. Whenever things get messy in their life, they blame the media for interfering with their life. So, when rumors of Britney Spears getting abused by her boyfriend Jason Trawick was published by a US magazine, the pop princess actually threatened the magazine of taking legal action against it.

The 29 year old singing sensation went totally crazy with rage when she saw a report by the Star magazine, which claims to have received tapes of her conversations with ex-husband Jason Alexander, to whom she was briefly married for 55 hours back in 2004. According to the magazine, Spears accused Trawick, her boyfriend and former manager, of hitting her in the tapes, telling Alexander, “he beats me”. The tapes were posted online by Star magazine’s sister company Radaronline.

But now Britney is denying the whole story by telling that the story is “completely and utterly false“. Whether her claim is correct or not, only time will tell. Till then, feel free to share your thoughts. Do you think it’s just another publicity stunt by Britney Spears?

NEW DELHI - They are the creative brains behind the breathtaking visuals of "Avatar", "The X-Files" ...

LONDON - Michael Jackson recorded his last album on voice mail, it has emerged. The late King of pop...
Copyright© 2010 The Gaea Times